Everest Base Camp is located at an altitude of more than 5,300 m. Trekking to the highest mountain in the world, Mount Everest, is very popular. It’s no wonder. After all, it is not every day that you have the opportunity to walk among several thousand. This route is considered by many to be one of the most beautiful routes in the entire Himalayas.

So we decided to delve into this topic and were helped by Diana Gontar. She is a travel enthusiast who has visited 52 countries so far and lived on 3 continents. She likes original, organized trips. One of her trips was a trek to the base camp of Mount Everest.

We’re going to the Himalayas

Diana managed to make this unique journey in November 2019. At the time, she didn’t know how lucky she was. After all, just a few months later, in March 2020, the World Health Organization (WHO) announced a pandemic of the novel coronavirus, reporting increasing infections around the world. COVID-19 has therefore successfully thwarted the plans of many people who, like Diana, were planning a trip to Everest Base Camp.

A memory of Poles who died in the mountains. Located on the occasion of the 80th anniversary of Polish Himalayan mountaineering in Namche Bazaar

In an interview with us, the traveler admitted that the trekking to the highest mountain in the world was an idea of ​​her friend Paulina. It was she who persuaded Diana and several others to go to the base camp of Mount Everest. Interestingly enough, although for our interlocutor this trek was not the first contact with the mountains, as she told us, she had no experience staying at higher altitudes.

– I used to go to the mountains in Poland, but I was such a typical tourist who goes out for a few hours and goes for example to the Chochołowska valley. I’m also from Świętokrzyskie, so we have small mountains (laughs). Sometimes I went for a walk there. However, I had no experience staying at altitudes above 1000-1500m above sea level – she explained.

Diana’s group consisted of eight people (including her). Not all participants in the expedition knew each other; some of them saw each other for the first time on the trail. Even before they left, they decided that they would not use the services of travel agents, but would organize a trip to the Mount Everest base themselves. Diana told us that although planning such a trip is quite time consuming, it is very satisfying. The group’s decision was also influenced by the fact that there is a straight road to Everest Base Camp, so there is no way to get lost.

The most dangerous airport in the world

Diana’s journey to her destination was as follows: first a flight from Poland to Delhi, a few hours transfer at an airport in India and then a direct flight to Kathmandu. In the capital of Nepal, the traveler and part of the group waited for two days for another friend. They took the time to go to the stores and buy the missing equipment. As she revealed, there are plenty of points where you can find the necessary accessories for trekking. However, their quality often leaves much to be desired. 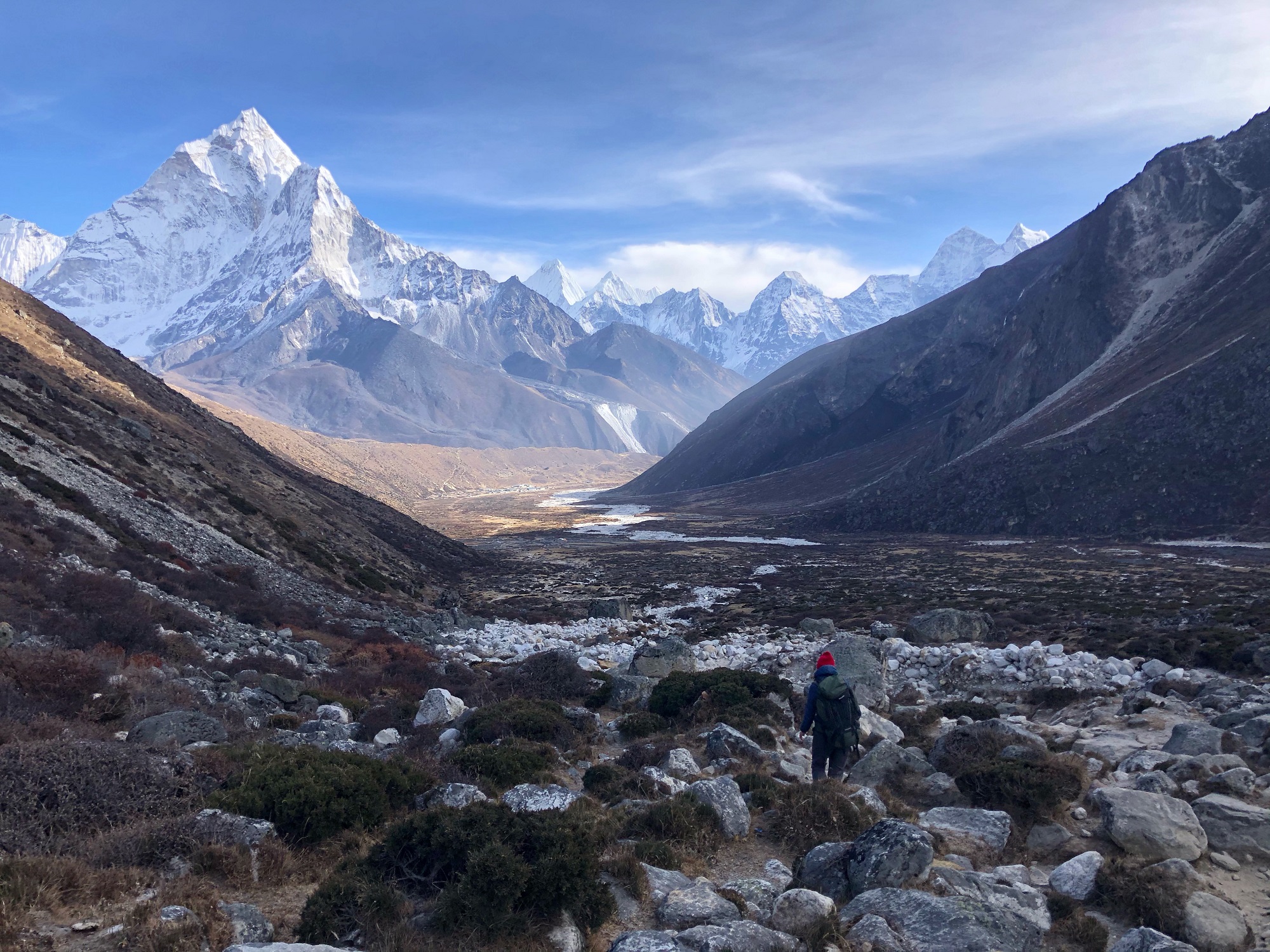 When the whole group was together, the participants boarded a flight from Kathmandu to Lukla, from where they would start the trekking. Not everyone knows this, but Lukla airport is considered by many to be one of the most dangerous in the world. This is due to the location of the port, as it is located at an elevation of more than 2800 m above sea level and the fact that it has only one short runway, only 460 m. And if that wasn’t enough, the runway starts with a rock and ends with an abyss. So we decided to ask Diana about her experiences and especially if she was scared. As she explained, most of all she felt excitement.

Diana and the group covered a total of about 200 km in 12 days. In an interview with us, she revealed that while she was still in Poland, she was preparing for trekking in the gym, among other things. However, she noted that the trek itself is not a technical challenge. – The fact that I had no mountain experience, and none of us had one, was no obstacle. There is only a path up, she said. She added that altitude sickness is the real challenge. It can develop when you are at high altitudes where there is less oxygen in the air. – I recommend to read among other things about how to acclimatize, can he buy drugs in Poland or in Kathmandu itself. We used such medicines for altitude sickness, because the longer we go up, the more we suffer from it and you just have to deal with it. For me, drinking a massive amount of water, about 4 liters a day, worked the best for me, Diana said. She told me that she bought the pills herself in Nepal and had an interesting “side effect” which was… her heels were tickling her.

A day on the road

Usually, tourists going to Everest Base Camp spend the night in hostels and hotels passed by along the way. So did Diana and the other expedition participants. We decided to ask her what such objects look like inside and what conditions can be counted on.

– The conditions are quite simple. Usually a double room is rented. Usually two beds are inserted and that’s it. Only a blanket or duvet for this, so I recommend people who are cold, like me, to bring a sleeping bag. (…) Of course, the higher it was, the colder it was. Already at Everest Base Camp, the temperature dropped to about -10 or -15 degrees Celsius at night. Unfortunately there is no heating in the rooms – the traveler explained. 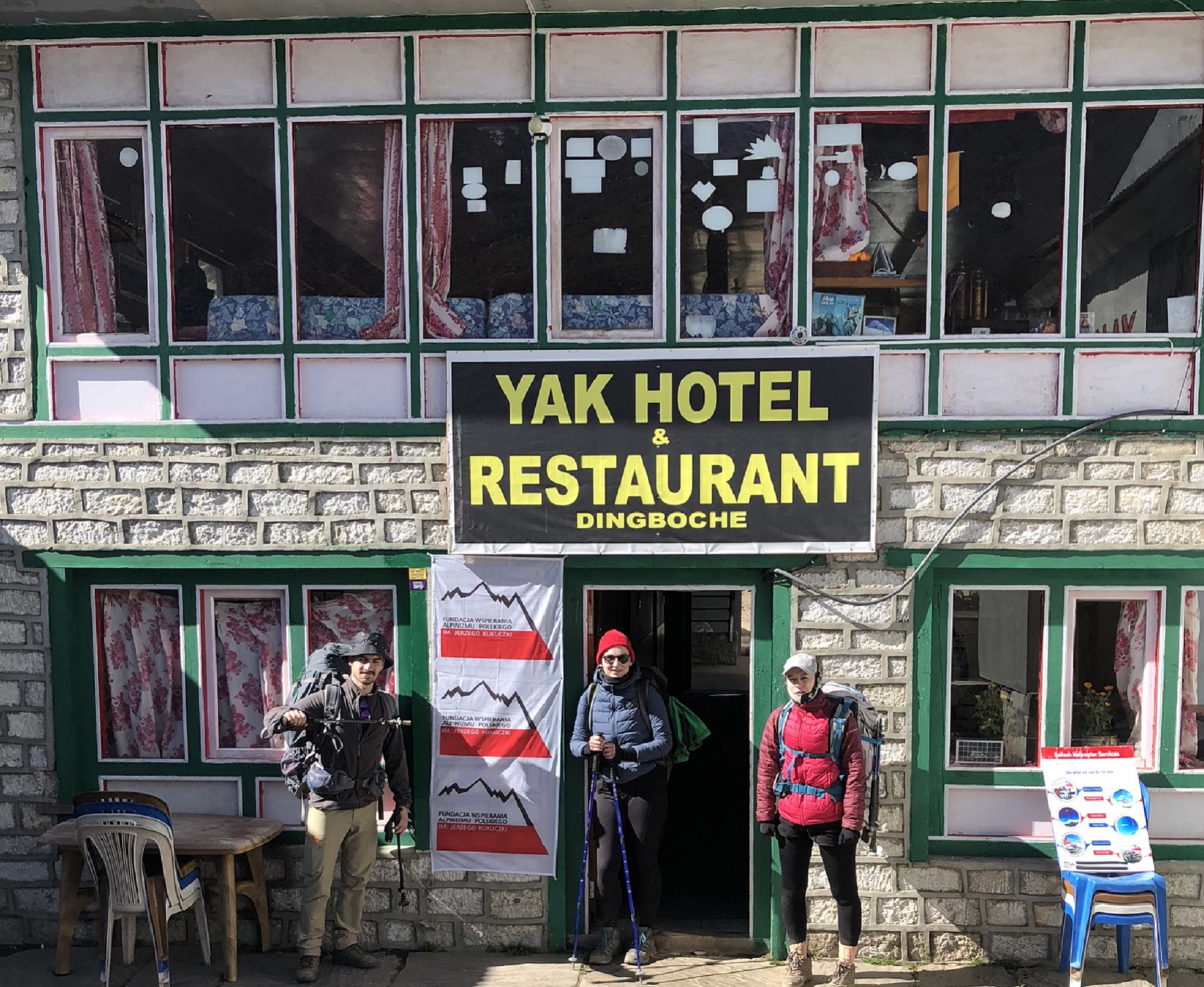 Yak Shelter in Dingboche. Jerzy Kukuczka left from here on his last journey

There is also a problem with access to hot water. Most hotels have water heaters, so you can take a bath, but you have to pay extra for that pleasure. “But we relied heavily on the cold water and moisturizing wipes,” Diana added.

The higher it was, the colder it was. Already at Everest Base Camp, the temperature dropped to about -10 or -15 degrees Celsius at night. Unfortunately there is no heating in the rooms

In addition to rooms, each shelter also has one large dining room, which fortunately is already insulated. There, tourists not only eat their meals, but also spend their free time. Our interlocutor also revealed that some hostels have introduced a fee for charging the phone. That is why people who want to save better take a few power banks with them. We also asked Diana about an exemplary day out in their case.

– We used to get up at 7 o’clock. We ate breakfast at the hostel, then quickly packing and personal care. You also had to prepare water by throwing a cleaning tablet into the bottle. Then we set off. We had a different distance to go, but never more than 18-20 km, sometimes it was less than 10 km. Usually we would arrive at our destination around noon-1pm and have lunch or find something to do. We played cards, I read a lot of books – said our interlocutor.

Diana revealed that there are two dates when it is best to go hiking: between February and May and from September to the end of November. – During the summer holidays, however, the weather is not conducive to hiking. Also, most shelters just close during this time — the traveler added.

Price of the trek to Everest Base Camp

Diana’s entire journey, including plane tickets, necessary permits, etc., was about PLN 5,500. The ticket for the plane flying from Poland to Kathmandu turned out to be the most expensive – she paid about PLN 2,700 for a return ticket. – The budget for trekking was about $25 per day. I’m talking about food and shelter. Virtually nothing else on site could be bought anyway – our guest explained. 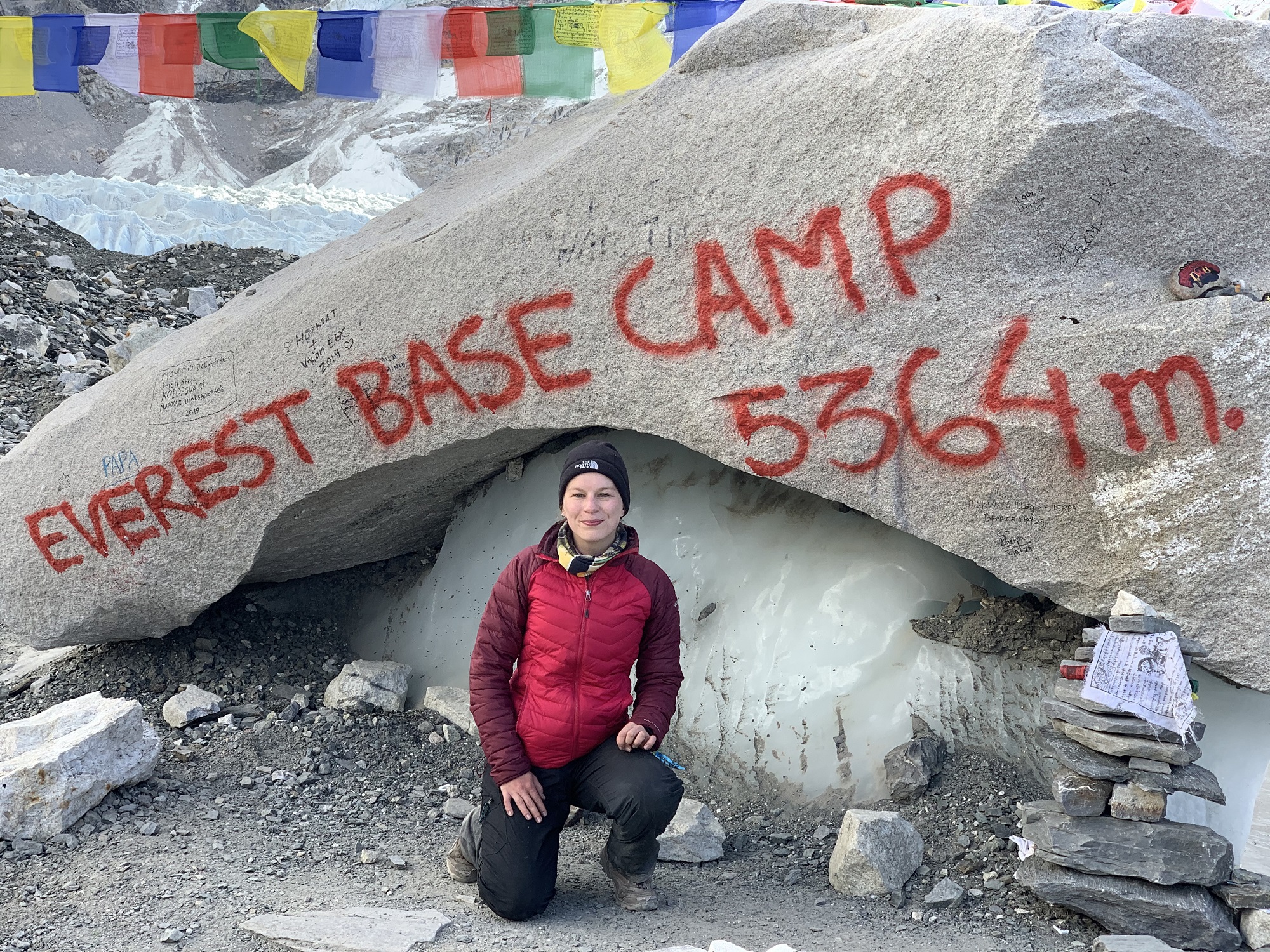 The 20-minute flight from Kathmandu to Lukla also cost a lot, about $170. This is one of the reasons why the expedition participants decided to return to the Nepalese capital by a different mode of transport, namely by jeep. But in retrospect, Diana finds air travel a much more convenient option.

The budget for trekking was about $25 per day

– It was difficult. The road is very tiring. (…) We were pretty tight because you brought as many people as possible to your car. There were 8 or 10 of us. I remember buying a local bottle of alcohol to survive (laughs). The whole way, from Lukla to Kathmandu, took us three days, and the cost was $60-80, so let’s say half the price of a plane ticket. (…) In retrospect, I can say that this aircraft is probably a more comfortable option – our interlocutor explained.

Diana Gontar also told us about what to eat along the way, how the human body behaves at such heights and what to keep in mind if you decide to trek to the base under Mount Everest. We recommend that you listen to the entire podcast episode. The next one will premiere on Friday, August 19.