Sunday (July 3) was the second day of the sentimental celebration of the 120th anniversary of the launch of the rail link between Kořenov and Szklarska Poręba.

The railway line Krkonoše – Jizerské Harrachov – Kořenov – Tanvald is the steepest and the only standard gauge rack railway in the Czech Republic. It also offers a direct connection to Szklarska Poręba.

The construction of this mountain line started on June 30, 1902. In a short section of 7 kilometers, 4 tunnels had to be drilled with a total length of 1,413 meters. The one in Kořenov, carved into a hard granite rock, is the most impressive. It is the longest, 923 meters long. 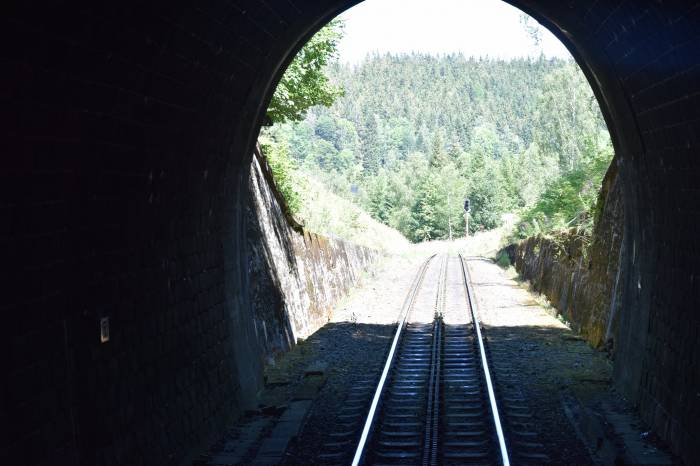 The Jizera Railway is part of the railway connecting Jelenia Góra, via Szklarska Poręba, Harrachov, to the Czech Republic. Built in 1902, it lived 115 years this year. The construction of the section from Jelenia Góra to Szklarska Poręba and further to the border with Austria took 14 years. The most effort for the builders was the section from Piechowice up, where several kilometers of artificial dikes had to be built, ravines and tunnels had to be pierced in rock faces, and the banks of mountain streams had to be connected with bridges. It was a huge structure: 30 road crossings, 60 culverts and small bridges. In Jakuszyce peat swamps had to be dug, more than 1 million m3 of soil was moved before the tracks could be laid on solid ground. The works were carried out simultaneously from two directions, but in the Austrian part they were slowed down by an accident when an 89-tonne bridge fell from the bridge over the Jizera. The connection from Jelenia Góra to Szklarska Poręba and beyond to the border with Austria (the Czech Republic regained its independence in 1918) was the last investment of the Royal Iron Railway in the Jelenia Góra Valley at the beginning of the 20th century. 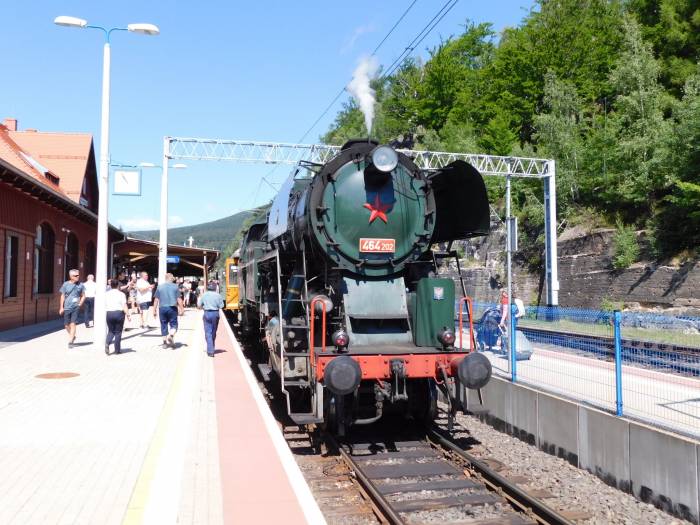 The railway has contributed significantly to the development of tourist traffic in the Karkonosze Mountains, although the line to Szklarska Poręba was not made just for tourists. More important customers of the carriers at the time were sawmills and glass blowers. Train sets were usually mixed, including passenger and freight cars. After a few weeks, the line was extended to the Czech Republic. It was possible thanks to the rail connection of the industrial areas of Liberec and Jablonec nad Nisou with Jelenia Góra. From then on, a common commodity was high-quality coal from Silesia, imported for the needs of entrepreneurs. On the line from Kořenov to Tanwald, 4 tunnels with a total length of 1413 meters were built and a rack railway was installed, since the slope of the slope there reaches 58%. Interestingly enough, there was not much interest in trips to the Czech side at the time. Passenger trains usually ended at Szklarska Poręba Huta station. Only a few of them went to the border crossing with the Czech Republic in Polaun – now Korenov. 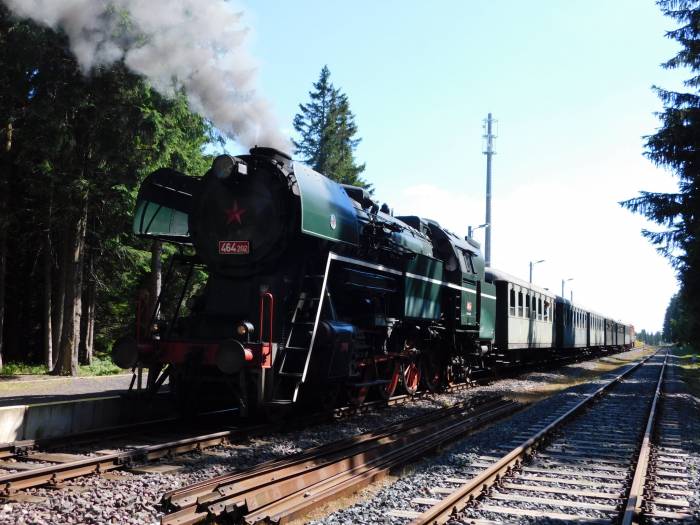 The event to mark the 120th anniversary of the launch of this extremely picturesque line attracted crowds of tourists and residents of the surrounding towns.

Sunday (July 3) was the second retro-style holiday. The Austro-Hungarian Emperor and the German Emperor also took part in the memorial trips. An extensive program for families with children was constantly being prepared. 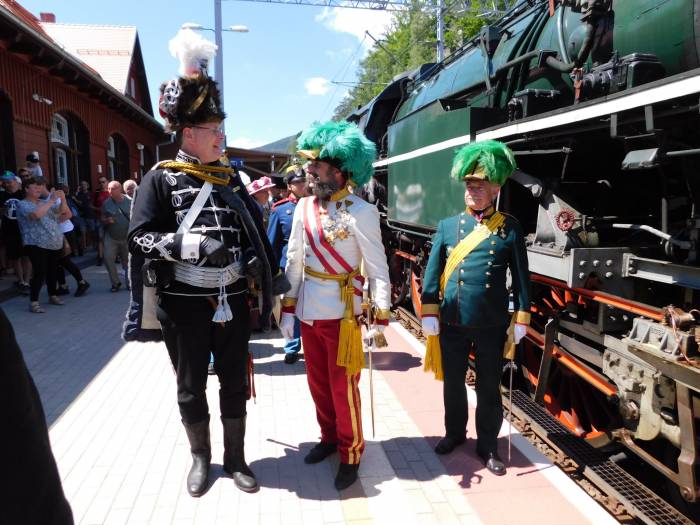 The record was broken in the consumption of Vratislavice beer, which Zubaczka has long supported, and a special bottle edition with the label of the 120th anniversary of Zubatka and the entire Tanvald – Kořenov – Szklarska Poręba railway.

We have a beautiful sunny weekend. And we had a great event with the Czechs about the arrival in Szklarska Poręba and Korenov of the Retro locomotive (120 years of rack railway). Great interest from the inhabitants of our city, especially our Retro fans :). I would like to thank everyone for participating and making this holiday more attractive with your presence. You are loved, irreplaceable. More attractions in our city coming soon to which I invite you today. – Mirosław Graf, the mayor of Szklarska Poręba, made no secret of his satisfaction with the successful holiday. 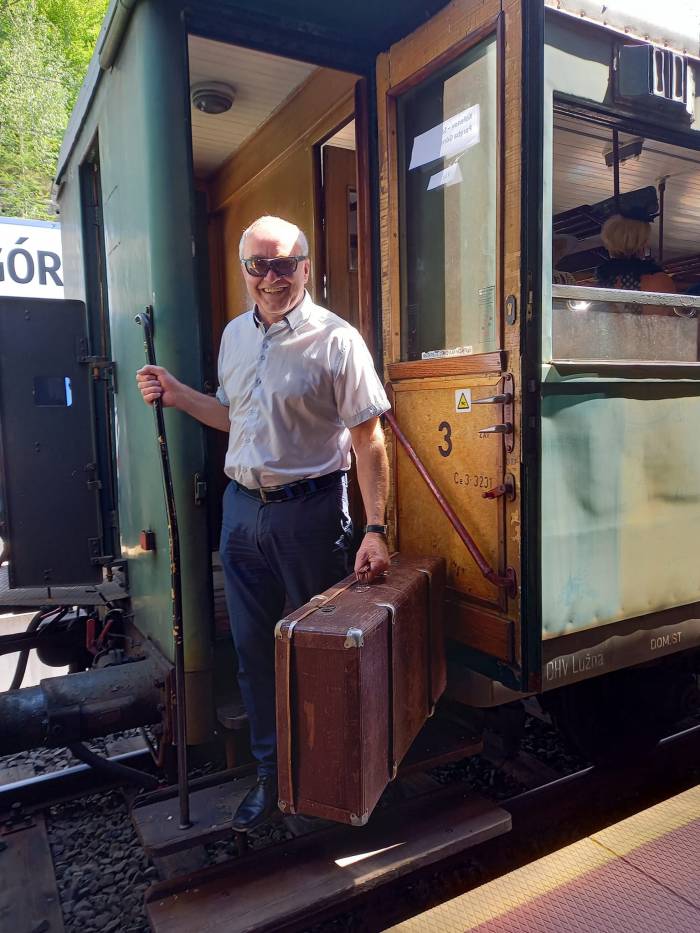 The editors are not responsible for comments from internet users on the article:
A sentimental journey. Retro train in Szklarska Poręba. Part II. If you think a comment should be removed, you can report it via the ‘report’ link.