Blueberry is a deliciously sweet fruit that we can eat with impunity because it is low in calories, yet extremely nutritious and the richest source of antioxidants of all fruits and vegetables. Blueberry season lasts all summer, so let’s make good use of it.

Growers sometimes refer to the August harvest as a “blue” hill. It is this month that we have the most of them in Poland and they are the tastiest. Blueberries help us take care of health, appearance and beauty. And since the Polish blueberry season is in full swing (from July to October), let’s take advantage of this time.

Thanks to its high water content, the daily consumption of this fruit supports the functioning of our excretory system. And the smooth operation helps the beauty! In addition, the navy bilberry peel is packed with anti-aging ingredients that increase the elasticity of the skin.

By neutralizing the effects of oxidative stress, they contribute to slowing down the aging processes and thus improve well-being. Eating them regularly will make your skin smoother. Mainly because blueberries are rich in resveratrol, also used in the cosmetic industry for its anti-aging and anti-discoloration properties. Due to the high content of tannins, they have an astringent and anti-inflammatory effect and strengthen the blood vessels. Organic fruit acids in blueberries reduce dryness, making the skin smooth and soft.

Lots of candy and few calories

Blueberries are not only rich in nutrients, they are also low in calories, which is why they are perfect for slimming. This is confirmed by a 24-year study published in 2015 showing that increasing the consumption of fruits – especially berries (as well as apples and pears) – improves the effectiveness of weight reduction.

Blueberries are low in calories and their anthocyanins have a positive effect on tissue sensitivity to insulin and glucose metabolism, reducing the risk of metabolic syndrome and type 2 diabetes.

Good for the eyes

Blueberries help to protect the eye structure from oxidative damage, which has a very positive effect on vision. RAF pilots were fed them during World War II to help them see better in the dark, because the substances in blueberries positively influenced the functioning of photoreceptors and also improved microcirculation through the eyeball. In addition, a healthy blueberry diet can prevent or delay many age-related eye problems due to its antioxidant properties. Therefore, it is worth eating them regularly in case of: macular degeneration, cataracts, myopia and hyperopia, dryness, as well as infections related to the retina.

Blueberries also contain carotenoids: antioxidants (lutein, zeaxanthin, etc.), flavonoids (rutin, resveratrol, quercetin, etc.) and other antioxidants that are highly beneficial for eye health. Vitamins C, A and E, which are abundant in blueberries, also have an extremely beneficial effect on the health of our eyes.

An important part of your cancer prevention diet

According to data from the USDA Human Nutrition Research Center on Aging, blueberries have the highest antioxidant activity of all other fruits. Studies based on Oxygen Radical Absorbance Capacity (ORAC) tests have shown that blueberries have a much greater antioxidant effect than other fruits and vegetables. As a result, they help prevent neoplastic diseases.

Blueberries good for heart and circulation

In an eight-week study of obese people at high risk for heart disease, eating 50 g of blueberries daily helped lower blood pressure in participants. No such effect was observed in the control group deprived of the daily portion of blueberries. Similar effects, especially in postmenopausal women, have also been observed in other studies. 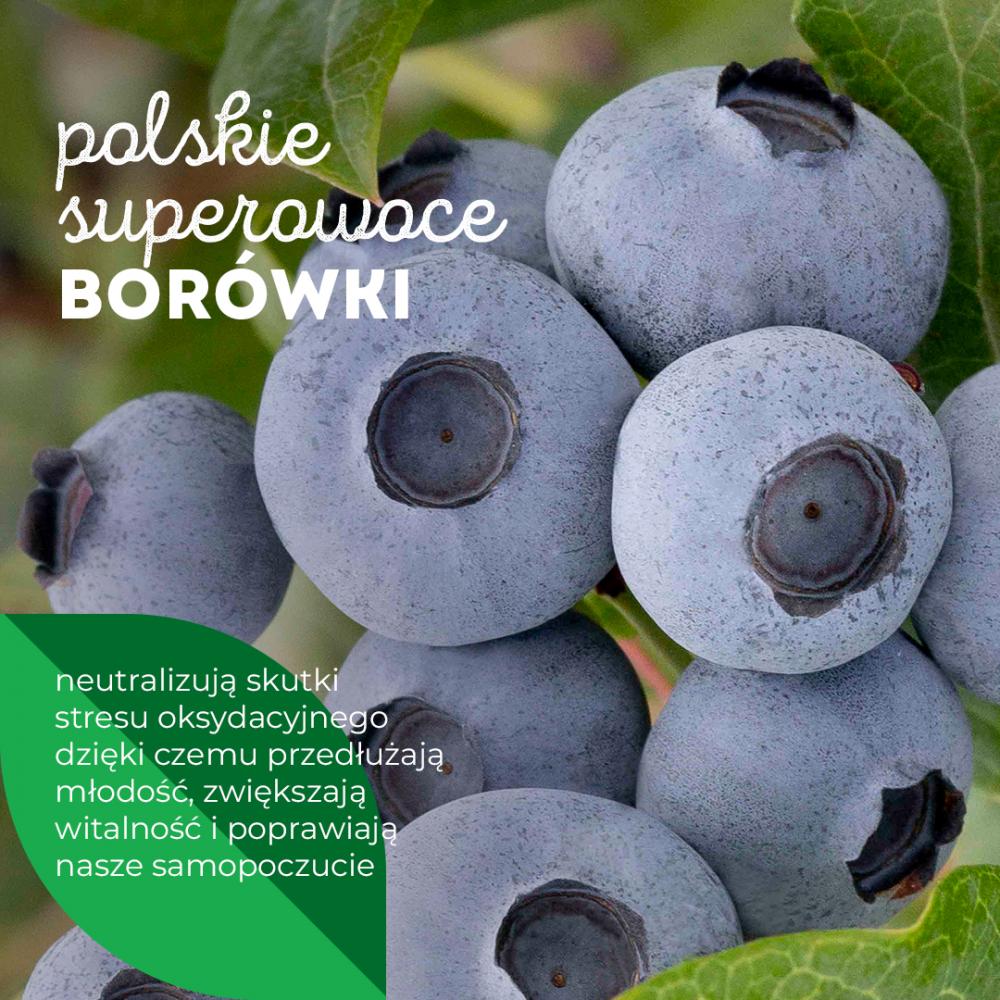 There are many studies that show that eating a glass of blueberries every day has a particularly beneficial effect on our metabolism. According to the researchers, we may even be able to reduce the harmful cardiometabolic effects of energy-dense meals in some way.

Thanks to phytoestrogens, which seal and improve the elasticity of blood vessels and improve the permeability of capillaries, these fruits are an important element of nutritional support in the treatment and prevention of atherosclerosis. In addition, the antioxidants present in blueberries counteract the excessive oxidation of LDL cholesterol.

Good for the excretory system

The substances in this fruit prevent microbes (such as E. coli) from sticking to the walls of the bladder and urethra. Because blueberries are closely related to cranberries, they contain many of the same active ingredients as cranberry juice used for urinary tract infections.

No wonder blueberries are considered a superfood. The values ​​are promoted by nutrition and health specialists at the National Center for Nutrition Education (NCEŻ), as well as by the Chief Sanitary Inspectorate.

These beneficial properties are the richness of various ingredients of blueberries:

You praise others, you don’t know yours

In recent years, Poland has become a leader in blueberry production – our share of the EU harvest is 30 percent. It is a response to growing domestic consumer interest and growing export demand.

In Poland, blueberry has been cultivated for decades, but the dynamic development of the production of this type of fruit took place only after interesting varieties were imported from the USA and introduced to our country in the late 1960s. Over the past 20 years, highbush blueberry cultivation has been the fastest growing fruit growing area in Poland. According to data from the Central Bureau of Statistics (GUS) (as of 2021), the national production of blueberries is estimated at about 54 thousand. show. Not everyone knows that blueberry has become a real export showcase of our country – Poland is second in Europe (after Spain) and eighth in the world ranking. Polish blueberries are mainly exported to Great Britain, but also to Germany, the Netherlands, Scandinavia and many other countries.

It was possible thanks to high cultivation and harvesting standards, more demanding than international standards, which keep the fruit fresh for longer.