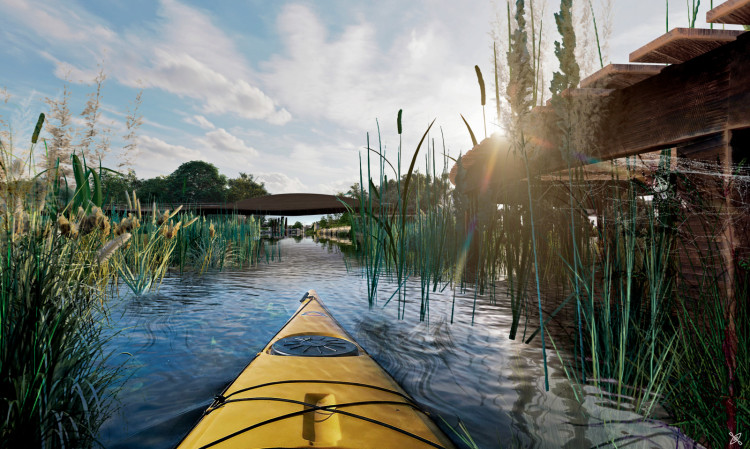 The green pavilion that merges into the landscape, wooden walkways, viewpoints, a canoe harbor and landscaping – these are the elements of the project “On the other side”, the concept of the development of the southern fortifications of Gdańsk. The author is Maja Krzyżyńska, a graduate of the Academy of Fine Arts in Gdańsk, currently landscape architect at a German design firm in Düsseldorf. The work was awarded the Grand Prix in Architecture at the Gdynia Design Days and was also featured in the Art’em All exhibition at the Plenum gallery.

Bastions with the historic remains of the moat are one of the biggest green attractions of Gdansk. Located in the center of Gdańsk, they are to the city what Planty is to Krakow – a green enclave in the center of the city.

There used to be fortifications on this site, a series of defenses of historic Gdańsk. Here the inhabitants defended the city against attacks from outside. Today it is a semi-wild area used by residents for recreation and rest. And for students and artists – a place of inspiration.

Even for Maja Krzyzyńskagraduated from the Academy of Fine Arts, who is the author of the interesting (and already award-winning) work “On the other side”.

This is a concept for the development of the southern fortifications of Gdańsk, prepared as part of the graduation thesis.

Until Friday she was on display at the Art’em All exhibition in the Plenum gallery. Previously, the work was awarded the Grand Prix in the field of Architecture at Gdynia Design Days.

– In my master I wanted to show the relationship between man and nature, show the value of access to it. I believe that such activities show a new perspective on the development of the city as a friendly place that makes residents aware of the value of the surrounding nature – says Maja Krzyżyńska. – That’s why nature has become a keyword for me. In my work I focus on virgin lands and the transformation of the modernized path from the side of Olszynka.

The overarching aim of the project is – as Krzyżyńska says – the preservation and preservation of natural environmental values. The proposed path with optional variants is inscribed in the landscape and emphasizes the existing landforms.

– The path contrasts with the apparently geometric terrain plan. The flowing curves and dynamic shapes are inspired by the unbridled nature and the “angular”, historically shaped terrain is rounded at every bend. The designed serpentine joins and penetrates its structure, mixing with the whole area of ​​​​the fortifications – adds the author.

A green pavilion that blends into the surrounding space

One of the elements of the project is the pier “Przystań”. After the path split, the second branch led through the headland. The slope is gentle, which allows a safe descent of smaller wheeled vehicles and allows people with disabilities to use this place.

The walkway itself creates a curved shape around the end of the headland. Parallel between the elevated walkway and the platform, the author proposes openwork stairs made of galvanized steel, which allow vegetation to grow freely. The pier was also built with water sports enthusiasts in mind. A slip and a ramp with a net allow canoeists to moor freely at the pier.

– From the opposite bank there is a picturesque view over the Kamienna lock to the panorama of Biskupia Górka with the clock tower in the main axis. Rustic wooden benches are arranged along the coast, and on the eastern side of the horizon there is a gentle line of the pavilion, adds Krzyżyńska. – Because of this, it is difficult to distinguish it from other hills, because the structure is green and the cozy interior is made of carved oak. The place was created with the idea of ​​sheltering from adverse weather conditions and taking a break during a walk or a bike ride.
Also special is the green roof, which is accessible from both ends of the pavilion on the rising ground. Such and no other construction supports the retention and management of rainwater. It can also be an attractive vantage point and space for recreation, or a bird habitat that blends into the landscape. 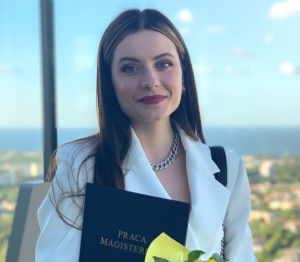 On the other hand – the concept of developing the southern fortifications of Gdańsk
Master’s degree 2021/22
Supervisor: dr Rafał Setlak
Faculty of Architecture and Design, specialization: architecture of cultural spaces

Maja Krzyzyńska – graduated from the Academy of Fine Arts in Gdańsk in the field of architecture of cultural spaces. At the urging of her parents, she applied to the 6-year General School of Fine Arts in Orłowo, where she defended her diploma in space design – interior design.

She then obtained a master’s degree from the Academy of Fine Arts in Gdańsk. He is interested in painting, sculpture, graphic design and designing public spaces. Her projects are characterized by bold ideas, based both on the spatial context and on people’s needs.

The work “On the Other Side” was featured in the Art’em All exhibition at the Plenum Gallery. The project also won the Grand Prix in Architecture at the Gdynia Design Days.

Currently, Maja Krzyżyńska works as a landscape architect at a German design agency in Düsseldorf. 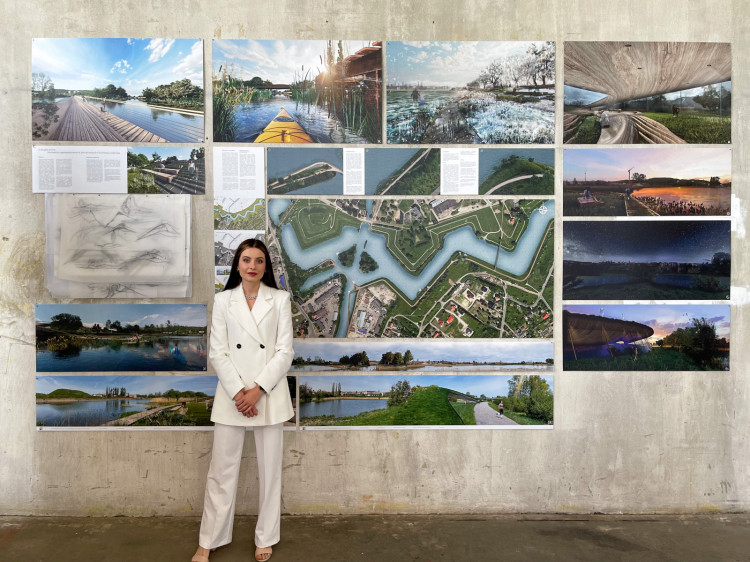