It is not easy to keep up to date with all your films, series, books or music. Every month there are more novelties in pop culture. So it is good to find a place where we can see a lot of valuables.

The Polsat Box Go platform offers interesting movie and series items and the new Polsat Box Go Premium package from Disney+ is a novelty on the website. It is a combination of more than 100 TV channels that can be viewed online on multiple devices, an extensive library of movies, series, entertainment and news programs. And Disney+, a streaming service with the Disney, Marvel, Star Wars, Pixar, National Geographic and Star brands. The promotional price of the package is PLN 50 / month. 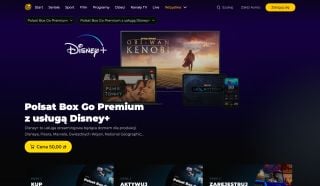 There is a lot to choose from! This will certainly help you recover a bit. Especially since the time of vacation and rest is just approaching. On the hottest days, it’s worth staying at home and having some valuable entertainment.

However, vacations don’t last forever. There is not enough time for everything, so you have to make the right decisions. We’ve decided to make your task easier and suggest titles worth catching up on. We give them a quality stamp!

From the movie news, it’s well worth reaching for the film The Daughter, Maggie Gyllenhaal’s directorial debut. The performance provides an interesting perspective on motherhood. Notable is the great role of Olivia Colman, who received an Oscar nomination for her performance, and the production itself received a total of three nominations for this award. It is a serious and very mature film.

Maybe not everyone had the chance to become the worst man in the world, a film by Danish director Joachim Trier nominated for two Oscars. The main character is Julie, who tries to organize her life, including the emotional one. It’s a great production! She is funny and takes heart. It will stay with you for a long time.

From Polish productions it is well worth going to Furioza, which tells the story of football fans in an interesting way, and the excellently produced and played Najmro. He loves, steals, respects. Both items remind you that cinema in Poland can be really good entertainment. You can also make up for the comedy that appeared at the Gdynia Festival a year ago – Nothing Soup. It is a story directed by Kinga Dębska, which takes us back to the times of the Polish People’s Republic and does everything to make the viewers feel at home. We have a good mood here, but also difficult topics related to family life.

At Polsat Box Go, we recommend the Movies category in 4K, which allows you to watch American hits in the highest quality. Among them are: Na knives, Świat w ogniu, 1917 and The Fourth Power. In addition, Polsat Box Go is also worth watching Last Trace (a film with Gerard Butler, which will be offered on the website without a cinema premiere in Poland), To Must Be Love (a romantic comedy co-produced by Telewizja Polsat) and Operation Mincemeat with Colin firt. On Tuesdays, films can be “rented” 10% cheaper as part of the action.

Perhaps the hardest series is to catch up, as they are necessarily longer lengths. Therefore, we recommend starting with the Polish ones included in the Polsat Box Go Premium package. These include the MENTAL production (handling youth mental health), as well as criminal items: Rysa, System, Osaczony, and Cień. The package also includes: Portland Tower, Murderous siblings and recruit. The package also includes access to pre-premiere episodes of selected productions of Telewizja Polsat during the current TV schedule – a day or seven days before they air on TV.

With a book and music on the beach

We recommend Legimi to people who want to relax and catch up on reading. The database of e-books and audiobooks consists of more than 75,000 items. For more information, visit the Plus website. Music lovers, on the other hand, will certainly enjoy access to the TIDAL HiFi service. There are a whopping 90 million music tracks waiting for you there, many interviews, music videos and podcasts, all without commercials. In TIDAL you will even find fresh soundtracks, for example the great Top Gun Maveric or movie Elviswhich are perfect for summer evenings. Details can be found here.