Together with his wife Jolanta he runs restaurant 7 Wish. They both love the series under this title and the cats. And fulfill wishes. They also love people and help. In their restaurant, needy people could eat a free hot meal every Sunday during the winter. Recently, they have proposed holding Monday meetings of Ukrainian and Polish mothers and their children. Grzegorz Kostecki talks about these encounters, emigration, travel and happiness with people

Why did I come up with the Polish-Ukrainian Monday over tea? I wanted Ukrainian and Polish mothers and children to integrate, so that visitors can get the most necessary from the locals information and a group of friends in town as it is for expats important. I was an immigrant myself. Except that for profit, not for fleeing people before the war.

The bets fell in Poland at that time. Also mine. One day the manager tells me: Grzesiek, if I were you I wouldn’t watch because he did not know the language, he took the dictionary with him and left for the Union. She is hope for you.

I followed this advice and only knew a few words of English I went to Wales.

I lived in a house rented by an employment agency for six months. they were there Poles from all walks of life, from different parts of the country. we were busy seven, eight people per room. I slept in a sleeping bag on the floor. Later I started working in a nice family business. I met Mrs Debbie there. She found me a house, helped me rent it and got the bills for me unknown language was not easy. After a year and a half I moved to Wales woman with children. They also didn’t know English. And Mrs Debbie’s family took us downstairs wings. They lived next door, across the street. With my wife we worked in shifts. They helped us. They took our kids out of school they offered food, took them with their friends to playgrounds and excursions. Our kids got in touch with them right away, so naturally they integrated and taught the language.

They currently live in England and study in Manchester. The son plays in the fourth Manchester City team. The daughter is engaged in modeling. Thanks to the people who helped us then grew into that place that was kind to them. Until We are in contact with Debbie’s family to this day.

Many people have helped me abroad. And it was extremely important to me. Today I try to support those for whom Poland and its language are foreign, and they must find themselves here. I know how hard it is to be in another country when the rest of the family is home.

At first I left alone, but my wife and children stayed on the land. Once they moved to England, it was my mother who had a heart attack in Poland. I was working full time, I couldn’t just drop everything, get in plane and go back home. This life of separation was difficult.

I don’t compare economic emigration to fleeing war when: leaving home is not a choice. But I thought I could help anyway. I know how important support is abroad locals. And hence the idea of ​​the Monday meetings of both countries at 7 to wish.

The agents not only showed the way…

Staying in Wales is not my only trip outside Poland. In 2002 In the past year, my boyfriend and I have been cycling to Spain for a century the existence of the Real Madrid football team. It took us a month. We could count on help throughout the journey. How our bikes broke down, people stopped and helped us. We were on our way in the mountains in Austria. We were also welcomed there. We rested with them all day: breakfast, lunch, dinner, overnight. rear free.

Then there were borders in Europe. In the village of Villa in Austria on border with Italy, there were quite a few police officers. We drove up to them cycle to ask which way to go to the border. It wasn’t then GPS. We took out a map and by showing it on it we tried to explain it now we’re going to Italy, or Madrid in general. The police officers took us to the station. We cracked a little. What is it about? They want to kill us or what? And they gave us drinks for the road, some bars, chocolates and so on they pointed the way to the border crossing. Not only that, we crossed the border Trevisso and the first frontier store we went into to buy? water. We had Polish-Italian phrase book with us. According to them we ask about this water. Meanwhile, people from this shop had time to look at our bikes from with Polish and Zielona Góra flags. The seller gave us some water small things. We got on the bikes and the gentleman is screaming for us for bringing us? the Italian flag so we can get lucky.

When we arrived in Venice, the city was filled with all kinds of tourists parts of the world. We differed from them in that only us were there bicycles. Hundreds of bridges over the canals, narrow streets, and we are everywhere with bicycles. People took pictures of themselves with gondoliers, and these gondoliers They called us so that tourists could have their picture taken with us and with them.
Italians are wonderful people. We were so lucky to meet only positive crazy. In Marseille we met harleeers from Paris. For the first time in my life, in we didn’t see Harlejowców at all. Leather, beards, nice bikes – unknown in Poland than a view, associated only with movies. We had no francs French, because there was a problem with the exchange of zlotys, and every country had then your currency. And those Harlejists made a cut and gave us some thousand francs. Before that we ate for about three or four days.

By bike to Madrid

During the whole trip we visited many cities. For the most part football matches. And nowhere was there a problem going to the hosts to sleep. People they took us under their roof, sometimes we stayed on the beach and though we had a tent with us, so we only set it up once this month.

In France, through which we traveled, no one was surprised. A lot people stayed overnight on the beach. People brought food, wine and beer. When the gendarmes appeared, it was… just to ask if we are ok or not we need some help. Sleeping on the beach didn’t bother anyone.

It was beautiful there. I remember standing in the sea up to my waist. Night. In the water the neon lights of the city were reflected and a friend said to me look how clean it is here water. I think to myself: how does he see in this darkness that the water is clean? I stood in the sea submerged up to the neck. Following the example of my colleague, I looked down and saw: your own pale feet. We traveled in boots and shorts shorts. We were very tanned except for the few? hidden places during the day, so my feet shone like white in the sea lanterns. The water was really crystal clear. In a city after we were also in the disco on the way. We met two DJs there. Not they wanted us out. We got some techno CDs as gifts.

Finally we reached Madrid. We were at a dream match. soccer players they knew we were riding these bikes especially for them. And I have the most precious souvenir from this trip – autographs from all of Real Madrid Madrid. And it was the best vacation of my life.

In 2004, when the borders of Europe opened to Poland, we left to the Netherlands with a friend. We traveled by bus. Although of course we took our bikes, which had to be disassembled for the trip, and turn later. We worked for such a nice couple. They gave us sleep, meals and 290 euros per person. It was really good money. they loved exotic farm animals. And we Poles hindered by communism, we were amazed at everything.

Contrary to what it seems, there are many people who are positively disturbed. Oh, that’s Kenny Berkson from Malmö, Sweden, for example, a 70-year-old coming to Nowa. cycled Soli on the way to Wroclaw. Or Tieran Freedman, a boy from England, who stayed in Nowa Sól for a few days and then moved on by bike to continue their journey through Europe. There were also a lot of Germans walking around away from Berlin via EU countries.

I meet such enthusiasts here. You know, I have a restaurant, I’m a chatterbox. When I find a listener I say it, show my album because I got it a photo gallery of your own travels and there will always be a man, which picks up the subject and tells me about itself.

We were generally lucky with the people. We got to know every place someone who somehow supported us, helped us, took us under his roof. And surely that’s why we somehow try to accept visitors from far away place. Because every place on earth – I think – should have someone who takes care of the bums.

E-EDITION OF THE WEEKLY CIRCLE 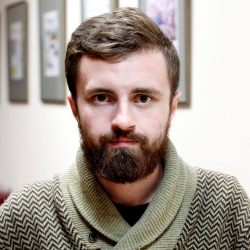