Anna and Robert Lewandowscy, Anja Rubik and Michael Douglas have their homes here. The King of Spain spends his family vacation here. Nothing unusual. Mallorca offers 300 sunny days a year, beautiful beaches, beautiful views and delicious food. What else do you want?

SEE ALSO: This is how Anna and Robert Lewandowski spend their holidays in their villa on Mallorca!

May weekend 2022: Mykonos has been a beloved star island for years! To look, what’s the most exciting about it?

Mallorca – the island of the stars

Anna and Robert Lewandowski spent their ninth wedding anniversary in their beloved Mallorca, where they have a house. A champagne toast to love and happiness was raised in a charming restaurant Ca’s Patro March in the small town of Deià, north of the island’s capital, Palma de Mallorca. The tables are set on a cliff overlooking the bay and the Mediterranean. It’s a great place for a romantic date. By the way, there are plenty of them on this beautiful island in the Balearic archipelago. Not only by the sea, but also inland.

The City of Kings

The cathedral, which towers over the capital, recognized as one of the best cities in the world to live in, makes a great impression. Entering Puerto de Palma by yacht, you can’t take your eyes off it. Anna Lewandowska claims that next to the famous round castle Castell de Bellver this is an absolute must. cathedral la seu it is huge (the nave is 44 meters high; there are only two higher in the world – in the cathedral of Beauvais and in Milan), and construction started in 1229. In 1851 the island was hit by an earthquake. The famous Catalan architect Antonio Gaudí took part in the reconstruction of the church. There is a palace next to the cathedral La Almudaina. It can be visited, although it is the summer residence of the King of Spain and his family. Majorca is great. It offers 300 sunny days a year, beautiful beaches, beautiful places and encounters with famous people who love it. On the island you can miss Anna and Robert Lewandowski, Anja Rubik, Catherine Zeta-Jones and Michael Douglas. While strolling through the historic streets of Palma, you may also stumble upon
King Philip VI, Queen Letitia and their daughters Eleanor and Sophia.

Mallorca: the beginning of tourism

Before tourism flourished in the 1950s, people had already come to Mallorca from outside Spain. At the beginning of 1838 and 1839, Fryderyk Chopin treated tuberculosis here and spent impetuous moments in the company of George Sand. “I am in Palma among palm trees, cedars, cacti, olives, oranges, lemons, aloe, figs, pomegranates, etc. (…) The sky is turquoise, the sea is azure blue, the mountains are emerald green, the sky is the heaven. In the day sun everyone walks lukewarm and hot; guitars at night and singing for hours. Huge balconies with grapes above; Moorish walls. Everything towards Africa, including the city, looks like this. In a word, a wonderful life,” he wrote. When Agatha Christie first came to the island from the Middle East in 1932, there were so many tourists in Palma that she couldn’t find a room in any of the three hotels. Eventually she ended up at the Illa d’Or Hotel in Port de Pollensa. When she saw him, she exclaimed: “This is the place I was looking for.” Nothing unusual. The facility, which exists today, located by the sea, seduces with a view from the balconies, and the scent of pine and tamarind trees around it is a real Mediterranean essence. If one wants to go back in time, to the 1930s, to feel that atmosphere with small hotels, beautiful views and bohemians talking about art in cafes, there is no better read than the stories of the British author.

In Mallorca, Anja Rubik found her place on earth, in an interview for VIVA! she said: “I’ve been spending a lot of time in Paris lately, because I work there, and in Warsaw, because I have several projects here and my European base. Of course there is also Mallorca, but a bit remote, that’s the best place to relax. Each of my apartments smells different, which is a bit strange because I have the same scented candles everywhere. Unfortunately you can still smell the novelty in Warsaw, I hope it goes away soon. Mallorca smells the best: lavender, rosemary and… goats, because there are many wild goats. It will sound absurd, but it is a beautiful fragrance. Jasmine also smells very bad when it blooms, but the smell of earth and goats is strongest in my house. I like this mix. When I go there, even for two or three days, I have a great rest”. 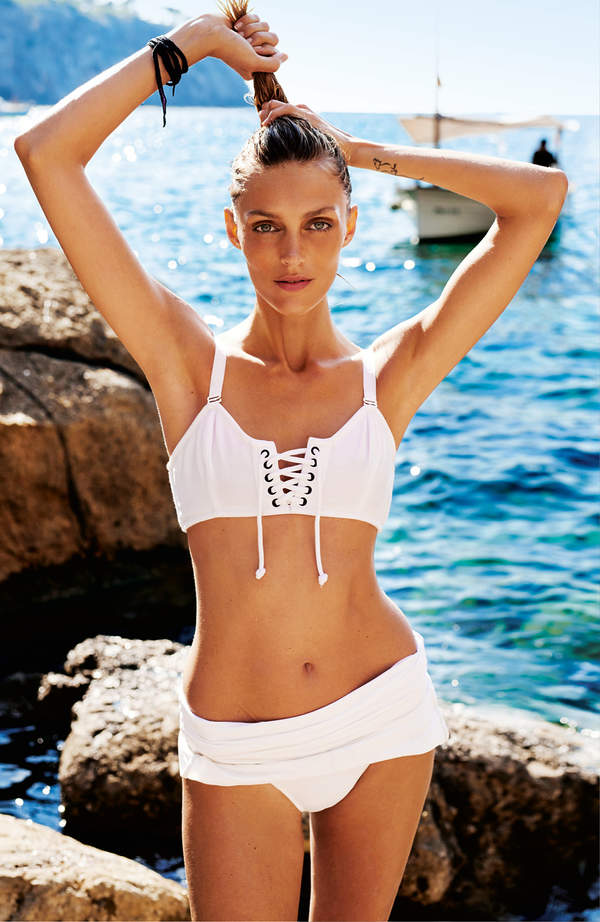 The photographer Barbara Czartoryska, who now lives in Thailand, told VIVA! Fashion about her previous 100-year-old house in Bunyola that she fell in love with at first sight. “We wanted to buy an estate for renovation, with a large plot of land. We bought a small house in the middle of town, glued to the rock, without any access by car, but with steep stone steps. There is no space, because if a neighbor argues with his wife, it is as if he is arguing with her in my living room.” The whole family of the photographer loved the island. “My children live in Mallorca, so I have built a nest here and flew on myself,” she says. Her son Jędrzej has created a great place here, serving vegetables from his own harvest, homemade goat cheese and homemade bread. From farm to table Looking like a combination of a Latin hacienda with a Moroccan farmhouse, Mallorca is one of Anna Lewandowska’s favorite places. Monika Brodka and Zofia Zborowska were also present. The farm is hidden among the fields in the eastern part of the island. On Slowspotter’s blog we read: “Here all your senses sharpen, conversations come to an end and you come home full of inspiration.” 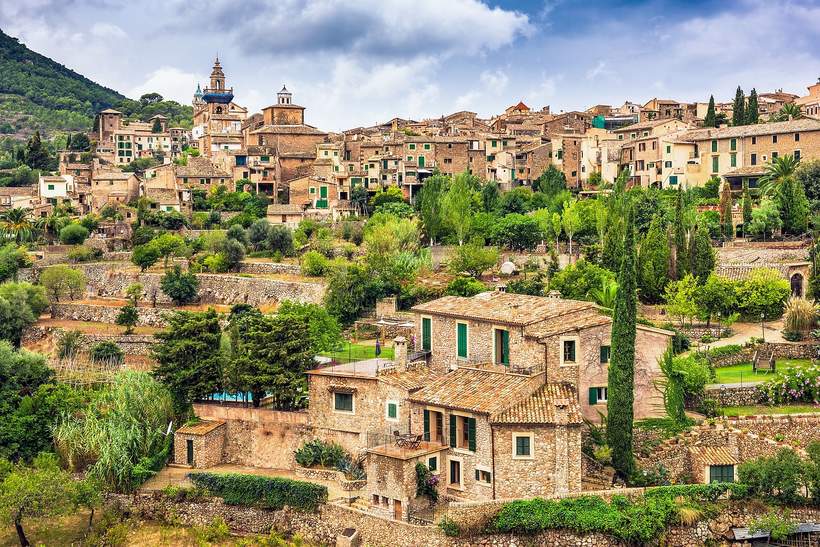 Many huge concrete hotels have been built here since the early 1950s, which have disrupted the landscape of Mallorca. In the 90s, most of them were demolished to create a more intimate character of the island, on the coast of which, on the islet of Sa Dragonera, the famous pirate Barbarossa had his base. He and other pirates have removed many cities from the coast. Their inhabitants hoped that by building in such places they would protect themselves from attack and looting.

One of the earliest settlers from England was the poet and scholar Robert Graves. He settled in the village of Deià, the same village where Anna and Robert Lewandowski celebrated their wedding anniversary. In it, Ava Gardner, who came here after her divorce from Frank Sinatra, hid from the world. Audrey Hepburn and Elizabeth Taylor were in Majorca. The Formentor Peninsula, the northernmost tip of the island, was loved by Prince Rainier III and Grace Kelly. They spent their honeymoon on a yacht moored in the bay. Peter Ustinov in Mallorca not only made a film about the adventures of Hercule Poirot “Evil Lurks Everywhere”, but also had his house near the mountain La Mola.

The development of tourism has made traditional villages and marinas a popular destination for Hollywood stars. The mild climate, the sun, the variety of landscapes from the mountains to the sea have made the stars of the past and modern people like to rest and work there. Many movies have been shot in these beautiful landscapes. It is here that “Cloud Atlas” was shot based on the novel by David Mitchell, starring Tom Hanks and Halle Berry, and the Netflix series “White Lines”. In 2016, the BBC series “Night Manager” was created based on the novel by John le Carré, starring Hugh Laurie, Olivia Colman, Tom Hiddleston and Tom Hollander. Three years later, the first episode of the series “The Mallorca Files” was broadcast. 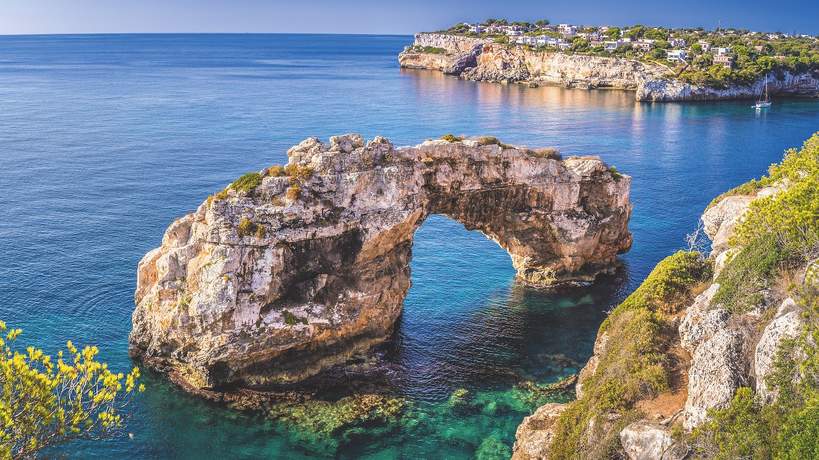 The Rock Bridge – Es Pontas rises from the crystal clear waters of the Mediterranean.

In 1990 Michael Douglas bought a historic mansion here. S’Estaca It was built by Archduke Lodewijk and there he met Empress Sisi, among others. A few years ago, the actor tried to sell the house for 29 million euros (he lowered the price because he originally wanted 55 million euros for it). After all, it is in his hands to this day, so you can probably meet Michael Douglas and his wife Catherine Zeta-Jones in Mallorca from time to time. Leonardo DiCaprio is here too, who loves to spend time with his friends on a yacht moored in beautiful coves. 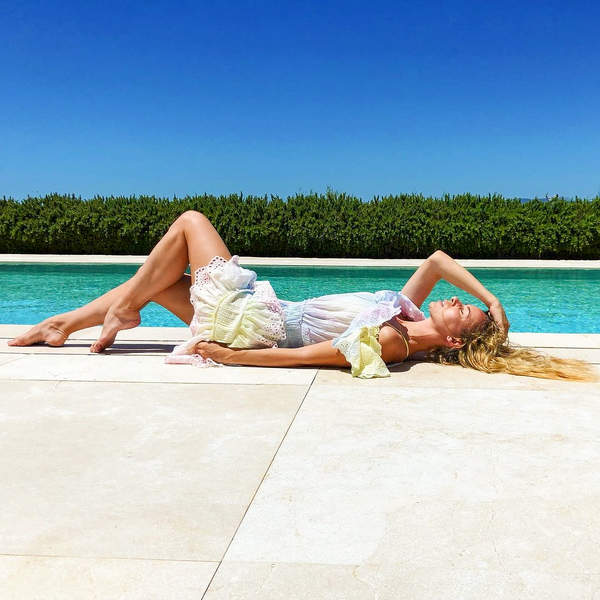 Beautiful stone houses with flower pots hanging at the front door, narrow streets and lovely beaches attract tourists who want to escape the daily worries. However, if anyone wants entertainment, Mallorca will also find something for itself. The infamous Magaluf, a few kilometers from Palma de Mallorca, attracts tourists for whom fun in the clubs is most important. In operation since 1988 BCM Planet Dance famous foam parties are held as this club has the world’s largest foam machine. T.the best DJs spin and spectacular laser shows take place.
As you can see, Mallorca has something for everyone, whether someone wants to have crazy fun or rest in a quiet hotel, or meet the stars.