The Amalfi Coast is a stretch of the Tyrrhenian Sea coast, south of Naples on the Sorrentine Peninsula in Italy. The region is a UNESCO World Heritage Site and includes 13 beaches, towns and villages scattered between secluded coves and towering cliffs. The area is surrounded by the Lattari Mountains. The most famous cities are Positano, Amalfi and Ravello. The coast of Amalfi is called the Divine Coast (Divina Costiera).

Amalfi is an exceptionally picturesque town and literally rises from the slope of a steep mountain.

Amalfi is not a very big city, but because of its fame and unique views, crowds of tourists come here every day. Set in a gorge, it is surrounded by hills with numerous vineyards and citrus groves on their terraces. Although Amalfi is not a huge metropolis today, it was once an important center of Mediterranean trade.

Amalfi is a former Roman colony located at the crossroads of the main trade routes. This place flourished between the 9th and 12th centuries. Amalfi traders were famous throughout the Mediterranean and could count on exceptional favors and privileges – from Constantinople to Egypt, Tunis and Spain. They were the main suppliers of goods for the Popes.

The city was home to the famous Amalfi Plaque, the first Italian codification of commercial and maritime law. Unfortunately, Amalfli was sacked in 1136 during the invasion of the Normans and Pisa. After these events, it never regained its glory in the international arena. Today it is one of the most expensive and exclusive Italian tourist resorts.

What’s worth seeing in Amalfi? The best attractions and monuments

It doesn’t take long to explore Amalfi. Virtually all the buildings are concentrated around Piazza del Duomo, the city’s main square. Between the white and pastel houses and tenements there are endless narrow streets with shops, most of them formed by charming and steep stairs. Due to its location and popularity among tourists, the city has almost no traffic.

What is worth visiting in fairytale Amalfi?

The main square of the city with a charming fountain in the middle. There are many cafes and restaurants around it.

The cathedral is the hallmark of Amalfi and towers over the city. The building is a combination of Romanesque, Baroque and Rococo styles. The origins of the Duomo di Amalfi go back to the 10th century, but since then the cathedral has been constantly rebuilt. The atrium offers a unique view of the surroundings.

This place deserves attention, not because of its architecture, but because of the surrounding greenery. It can be proud of a beautiful, paradise garden.

The famous museum has been operating since 1969 on the site of a former printing house. Interestingly, it was in this printing house that the production of handmade paper began in the 12th century.

Valle delle Ferriere is a little far from the city, so you can admire the unspoilt nature of the region. There are unique hidden waterfalls.

The cave has a mysterious history as it was accidentally discovered by a local fisherman. It gets its name from the amazing emerald green reflections that illuminate the water. There are excursions to the cave and it can be reached by boat.

The Path of the Gods

This unique route is located around the town of Positano. Wandering along the Sentiero degli Dei, or Path of the Gods, is one of the biggest local attractions. The route offers divine views as it runs high above the city. The whole walk takes about two hours one way and the route is 6.5 km long. There is a bus service from Amalfi.

The best way to enjoy the paradisiacal views and attractions of the Amalfi Coast is by boat. Many excursions along this amazing coastline are organized locally. The most interesting attractions are trips to hidden caves, coves and those that allow you to admire the amazing panorama. You can also visit one of the most expensive places in this part of Italy, the island of Capri, full of luxury hotels. The island has even been given the name of the Island of Lovers, as it is the perfect place for a romantic getaway for two or a marriage proposal.

When visiting a place as extraordinary as the Amalfi Coast, don’t forget its beautiful beaches. The waters of the Tyrrhenian Sea are clean and calm. The beaches are mostly in small coves at the foot of the cliffs and the only way to reach them is by taking a water taxi. Where is the best place to sunbathe on the coast? 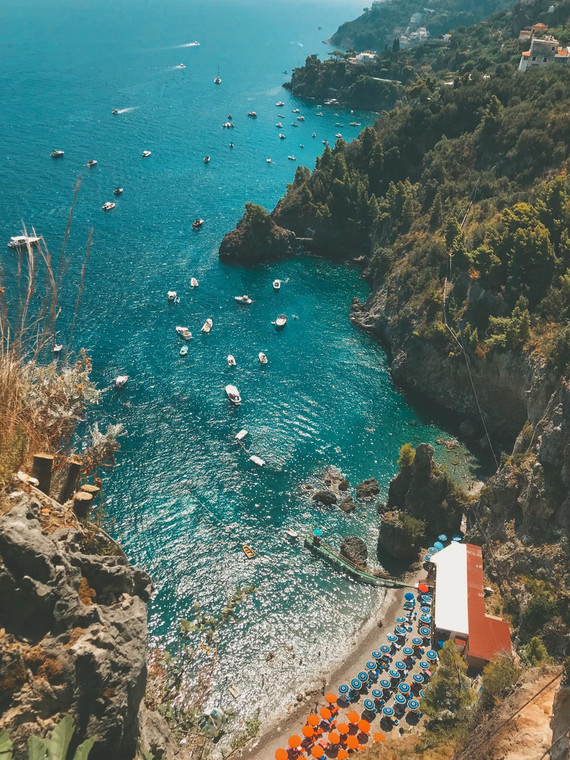