Traveling by car for the sake of traveling is an increasingly rare phenomenon. We choose a plane or a car, but above all to get there quickly. On the one hand, I completely understand. On the other hand, it’s not a journey, it’s transportation.

And so be it. But such a ride can also be a journey. And it’s one of the best. Don’t have a specific plan, no timetable, plan at night, get off the highway and enjoy the ride. You come to amazing places, you see things you didn’t expect.

Plus, do it in a classic car. The joy will be even greater and I know it will bring you even more adventures and contacts. For this I chose my 1989 Corvette. Read what it was like.

The route I chose had no specific plan. There was a budget cap and possible places I would like to be. In the end we traveled 3947 kmby Poland, Czech Republic, Slovakia, Hungary, Austria, Slovenia, Croatia, Bosnia and Herzegovina, Montenegro, Serbia and Romania.

Some of these countries (Austria and Slovenia) came about by accident and passing through, but I have to admit it was worth it. Austrian Burgenland is beautiful and even those few tens of kilometers gave a lot of pleasure† Slovenia in turn was also a nice and temporary break, but crucial from a financial point of view. Only gasoline costs less than 1.6 euros per liter there – always a kind of saving.

I will pass Hungary in silence – nice towns, but the roads of terrible quality, average signage and a multitude of speed cameras hanging in “evil” places above the roads somehow do not encourage exploring this country.

The key was linked the Balkans to Romania† You can see a lot of things in the photos, but nothing will give this impression if you leave in Montenegro by convertible from the beautiful winding roads in the mountains and the panorama of the Bay of Kotor opens up before you. A beautiful place with good roads, expensive houses and the overwhelming smell of Oleanders growing along the road. 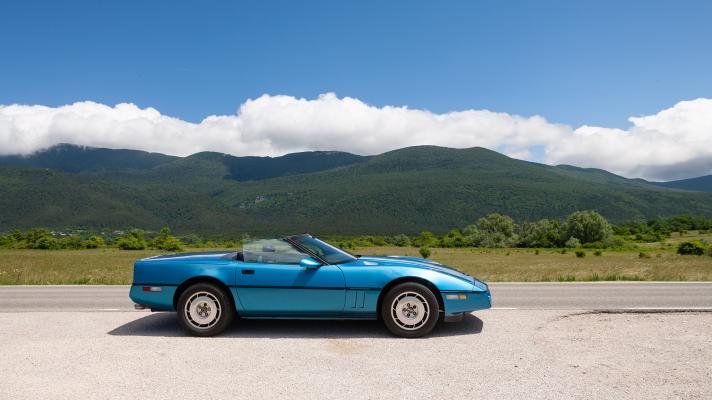 This is Croatia too!

Croatia is popular with compatriots for its beaches and cold Karlovacko. It is a lively, beautiful Zagreb, beautiful roads through Slunj and the Plitvice Lakes area, the road to the sea that resembles the American interior, and Jadranska Magistrala. Thanks to the highway it is no longer crowded, but still charming, with the sea on the right and the mountains on the left (if you go south)† This is a ride and unforgettable views. Just like going through the mountains at the mouth of the Cetina, local pubs along the way and pouring strong coffee there with the obligatory glass of water.

The latter can also be found in other Balkan countries.

For example in Bosnia. This is a country where you can be sure of two things. First, you will find the Golf II everywhere. Really everywhere. And there will always be at least one color of “juicy scrambled eggs”† The second thing is landscapes. It was in Bosnia that Corvette climbed the most demanding hills, rode the road that used to be a railway and visited one of the most beautiful routes – from Mostar to Sarajevo and then to the Serbian border† 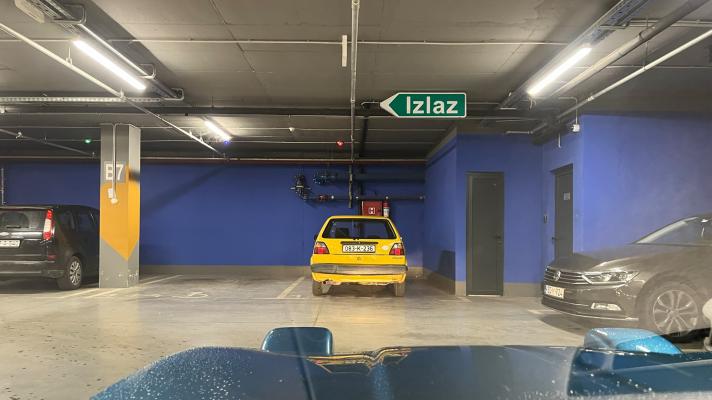 Yellow Golf – we are in Bosnia

It leads first the Neretva Valleyand then through the Drina Valley. The road that winds along the banks of the rivers is of good quality and offers truly breathtaking views. You go 90 km/h, open roof, water, rocks and beautiful greenery all around. These are also tunnels carved into the rock, in which the sound of the American V8 is beautifully spread. And the treacherous weather that can surprise you with a wall of water and hail in the mountains.

When in Serbia you will be surprised by “nice folklore” and a kind of familiarity that makes the ride extremely pleasant and “chillout”. And then you go to the lake, which will turn out to be a river – the Danube. This is the Iron Gate – the gorge of this river that forms the border between Serbia and Romania. And also beautiful roads and views that will remain in your memory forever. 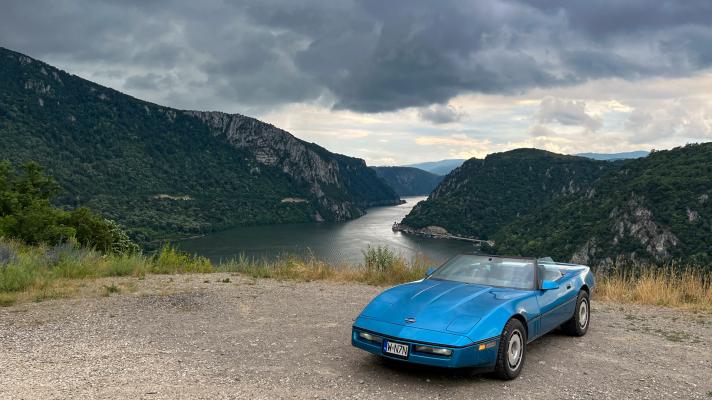 I will remember Romania as a very eclectic country. Terrifying in places, charming in places with colorful villages full of flowers. As I walked past the houses, I just waited for an orchestra to appear around the corner and play lively tunes.

But Romania is also one of the destinations of the trip – route 67C, commonly known as Transalpina†

It is less popular than the Transfogar road but is higher. Opened after the winter break until early June, it’s still haunted with snow and mist limiting visibility. Under these conditions, numerous serpentine we climbed 2145 meters above sea level† It is the highest road in Romania. Then it turns into an incredibly dense forest, bisected by a narrow road, where telephones lose their range and the sound of the engine reverberates off the walls of trees.

See the 61 photos
The view of Transalpin was amazing 🙂

Some memories also come from Slovakia, where the National Parks Slovak Karst and Slovak Paradise offer the blue roadster a great setting and further challenges – the marked route also runs along the route of the mountain race on Dobšinský Mound.

Such a journey is people

On the one hand, a solitary journey is more difficult, because it only condemns us to our own company and sometimes does not even allow a moment to “take our minds” off the route. On the other hand, such an expedition therefore sounds fuller. Thanks to the people we meet. And while driving the classic we will get to know many of them.

I don’t count how many times I honked, waved, made stingers, or just thanked me for a “thumbs up” or a big smile on my face†

After crossing the Polish border, I had the impression that I was in another world – where classic cars and travel are more appreciated. Pedestrians, drivers of other cars, tourists – no modern car would arouse so much interest. I think many holiday albums will find a place for a blue car with a madman at the wheel flying roofless in the rain or squeezing through a wooden bridge. If it weren’t for the classic, I wouldn’t have anything to talk about with German retirees spending their holidays in Croatia with their 1990 BMW 735, still in perfect condition and with a smile on the owner’s face. In Zagreb I hadn’t met Lara and Villim – a bunch of crazy petrolheadswho race their Peugeot 106 in mountain races on Mount Sljeme. Absolutely unofficial, of course – like the Balkan version of the Japanese gowns.

If it weren’t for the classic trip, I wouldn’t know why Serbia has youngtimers cultures (“Because we drive old cars anyway”), why Bosnians ride old Golfs (sentiment from the time of production in Sarajevo) and “barrels” (because they are almost Albanians).

Corvette also awakened the language skills of the drunken English youth, who, after noticing the signs, shouted in Polish: “You …. in ch …”.

On the other hand, in Serbia I also met Ola and Staszektraveling from Krakow Mazda MX-5. Remember, wherever you are, the chances of two blue roadsters from your country meeting each other is never zero. 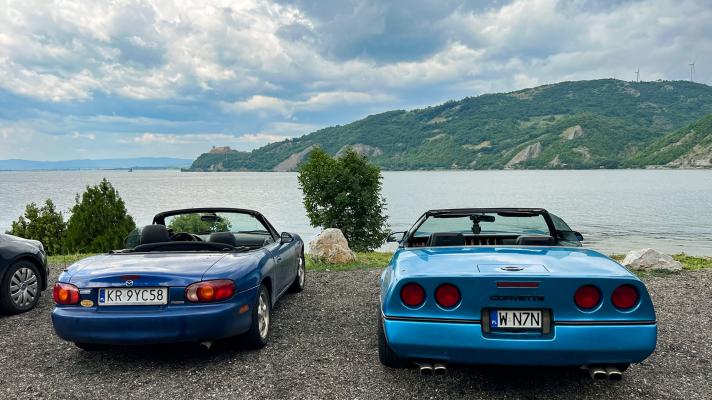 How many blue Roadsters did you expect in the Serbian countryside?

Do you know what border crossings look like on such a journey? †Good day. Passport, car papers, please… ooh, what engine? What year is it, how many horses does it have? Good way“You can make new acquaintances from such phrases, and they will definitely “make you a day”.

It was a “Are you crazy?!” trip. Even my mechanic, who assembled the car for me until the last moments, decided that I am not quite normal taking a powerful V8 for such a long journey.

Well, even a specialist can be wrong. It worked without any malfunction.

I started every day with an acrobatics of packing my luggage, then I took the roof off and started the engine. The synthwave clocks went up happily and I just kept gargling. 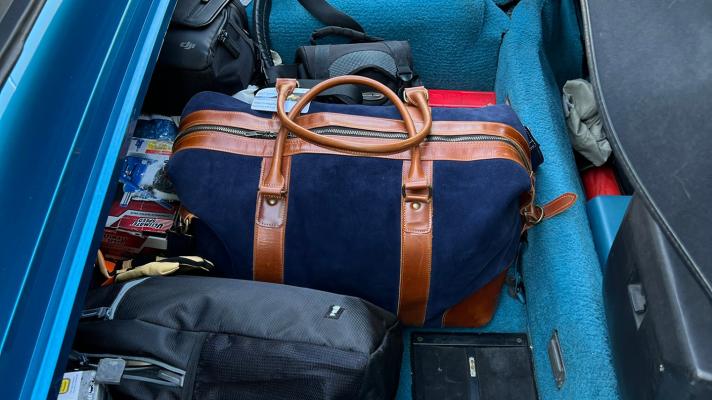 Something else would come in!

If you think the Corvette is not suitable for streamers then… you are right. It definitely prefers smoother turns and corners where the huge turning radius is not disturbed. And most importantly – it must be equal. Fatal roads are not pleasant for a very stiff suspension and for the driver. In addition, the grip of the high-torque rear-wheel drive sometimes left something to be desired. But still in the lead, on average more than 350 km per day, without too much stress†

Yes, I surprised gas station workers who were looking for a filler every day, but I’m happy anyway. The smoke average “two dozen” after the Warsaw V8 consumed less than 500 liters of fuel in 11 days – that is on average about 12.5 – 13 liters per hundredincluding mountaineering.

I wouldn’t regret it if I hadn’t gone

Car tourism is something wonderful and irreplaceable. Classic tourism – even more. Despite the 21st century, the internet and “full civilization”, such a journey can still be an adventure – for you and for the car. Even if, like me, you get stuck in the mountains, one of the seals will start to let go during a rainstorm, soaking your pants. Even if the Bosnian mountains greet you with such turns and rain that you will drive with your eyes protruding on the next “side” and watch motorcyclists fall into the bushes (nothing happened except insulted dignity).

It was worth seeing and feeling those potholes where the plastic American bathtub creaks cruelly, it was worth negotiating a bribe with the Bosnian police, for which a “nice car” was equivalent to “20 Euros for a coffee and my friend”.

I wish everyone such an adventure and such a journey: no plan, no rush – you will feel life in a completely different way.