From the very beginning, cryptocurrencies have been associated with high volatility and dynamism, and this story is not going to change anytime soon. In mid-May, a digital token – Terra Luna – that was supposed to be stable, caused the cryptocurrency to crash. Now, a few days later, Terra 2.0 is being created as if it completely ignored the whole drama that shook the cryptocurrency world a few days ago.

Stablecoins are designed to be held constant in value – usually at $1 per token. However, Terra’s stablecoin collapsed in mid-May, falling as low as a few cents against the dollar. This situation has shaken confidence in the largest stablecoin – Tether.

The idea behind Terra 2.0 is to restore the ecosystem of different protocols, but without the UST stablecoin. Terra 2.0 has been distributed to Terra owners and currently has a market cap of $1.2 billion.

Guarda Wallet adds both #Glow 2.0 and #LunaClassic $ LUNC with the next scheduled update.

Learn more about @terra_money‘s plan for the new one #terra starting https://t.co/VzLTLBo0Dh

“At some point you have to admit defeat and let the project bleed to death. Terra should be such a project.” – wrote Mads Ebergardt, a cryptocurrency analyst at Saxo Bank. “In our opinion, Terra has already done enough damage to individuals and the entire cryptocurrency market. The people behind Project Terra seem to believe that they can always try again if their first attempt does not yield the desired result, regardless of the fact that their flawed design has already caused a billion-dollar crash.The Terra case does not show the cryptocurrency market in a good light, and it does not for Terra 2.0’s “let’s just try it again” story The cryptocurrency market should focus on value creation projects to become something other than a speculative asset class.

Congratulations on the #Crazy community about this rapid achievement of collaboration

The correlation between cryptocurrencies and stocks is disappearing

While the leading Nasdaq index rose about 6.7% last week, Bitcoin and Ethereum fell about 5% and 14.7% respectively at Friday’s close. Bitcoin recovered most of its losses over the weekend, but is far from gaining ground for US indices. “Right now, Ethereum is down 8.3% since the beginning of last week. If the lack of correlation continues, it could fuel more fear in the cryptocurrency market as it could indicate investors are more and more willing to take risks in the stock market than in the cryptocurrency market, which could prolong the cryptocurrency’s decline.” wrote Ebergardt. A Saxo Bank analyst points out that for Bitcoin to follow Nasdaq, it must break resistance at 31,500 (BTCUSD) from its current price of 30,600. If it breaks this resistance, it can jump to 36,000. the support at 28,500, we can see Bitcoin as high as 20,000. 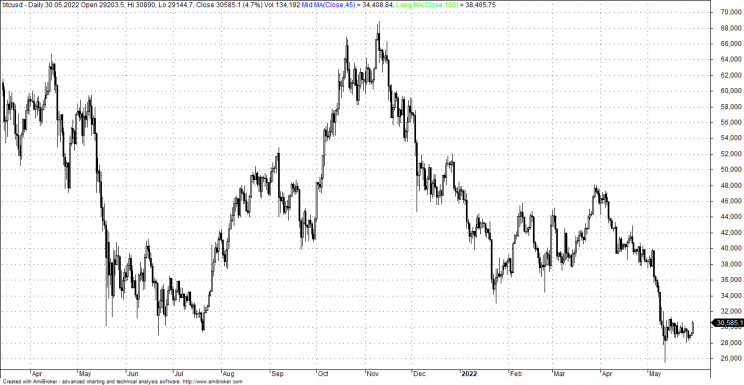 See also: The economic crisis also has good sides, says Elon Musk, and in a way he is right