Hundreds of social media stocks since early May 2022 had publications claiming that a bill in the Australian state of Victoria would ban people from “growing their own food.” However, this is not true. The law, which aims to support the agricultural sector and is still being worked on by the Victorian Parliament, contains no such provision. In addition, the local agriculture ministry has denied the false claims.

“Australian authorities are banning animal husbandry and the cultivation of vegetables and plants for their own needs,” reads a May 13, 2022 message, which saw 59 contributions. Later in this publication we can read the anti-EU story promoted by the author.

The contents are accompanied by a photo featuring Prime Minister Mateusz Morawiecki and bestselling author Juwal Noah Harari. The author of the publication does not explain why he chose this particular photo to illustrate his theories. However, the photo was taken during the meeting Morawiecki and Harari On May 11, 2022, at the Impact’22 conference in Poznań, “the most prestigious economic and technological event in Central and Eastern Europe”. The author of the publication shared in the comments a video with Rafał Piech, the president of Siemianowice Śląskie, who is the leader of the anti-vaccination movement “Poland is one”. In the recording, Piech calls Harari “the guru of contemporary globalist philosophy.”

Similar statements about the law in Australia were also made available in English. “Prime Minister Dan Andrews has passed a law banning people from growing their own food. The 2022 agricultural law amendment was presented in Parliament’s second reading. The reason for the changes is biological safety,” we read in a tweet made available by a profile called “Apex World News”. This Twitter profile looks like a traditional media account, but the link in it takes you to a website that no longer exists.

Publications with a screenshot from Twitter were shared in Romania, Australia, the United States and France, among others.

However, the claim is false.

The draft agricultural law does not contain such provisions

The publications concern the amendment of the Agriculture Act (Agricultural Amendment Bill 2022), on which the work of the Victoria State Parliament is still ongoing (as of 25 May 2022). The project aims to amend 11 laws introduced in the 1980s and 1990s and address various aspects of agriculture, including the control of animal diseases and the use of pesticides. The bill has not yet been passed by the House of Representatives.

The bill contained in the bill, which can be viewed in its entirety on the Victorian Government’s website, contains no provisions on an alleged ban on private food farming.

– Globalization and the expansion of trade have made Victoria more exposed to biosecurity risks and the number of new pests entering our state has increased. These changes impose new obligations to face these threats, said Victoria State Parliament Speaker Jacinta Allan on April 6, 2022.

– The bill improves the control of harmful weeds and nuisance animals. It also strengthens the powers of inspection and enforcement officers to better regulate the risk of the spread of pests in the state of Victoria, Allan explained when presenting amendments to the Land Protection Act of 1994 for weeds in Victoria.

Australia has strict laws to prevent the spread of what are known as ‘harmful weeds’. This is not new. On the list of the so-called “Forbidden Weeds” in the state of Victoria, there are many species of plants that are poisonous to livestock, including: horsetail, a crocodile alternanter whose dense clusters can restrict the flow of water used in irrigation systems, and mountain ash which is endemic in Europe, but not in Australia.

The spread of invasive plants can destroy endemic species and cause disease in farm animals that do not have access to their natural food.

Representatives from the Victoria Department of Agriculture said on their social media disinformation page that the bill “will help ensure food security and access to export markets (…). The changes will not destroy crops and it will not stop people from buying their own food.” to cultivate.’

– No one will be deprived of the opportunity to grow their own food. The changes are intended to support the agricultural sector, which allocates AU$17.8 billion annually and creates 67,100 jobs, a Victoria State Government spokesman told AFP on May 13, 2022. 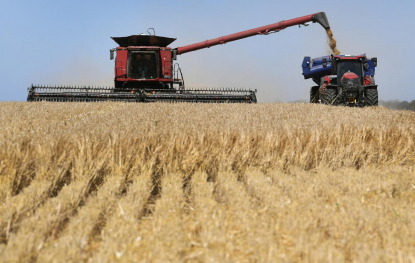 Farmers: to trade was “misunderstood”

The bill allows authorized inspectors to inspect the site, for example to investigate the source of chemical contamination, in some cases to take samples.

The opposition and other stakeholders reacted to the misinformation and misinterpretation of the proposed law.

“Disinformation about the bill suggests that authorized inspectors can search the area without a warrant, owner’s consent and without proof of identity. The VFF believes the amendments to the bill have been misinterpreted,” the Victorian Farmers Federation (VFF) lobby group wrote in a statement on May 6, 2022.

A few days earlier, during a parliamentary debate on May 3, the transcript of which is available on Parliament’s website, opposition MP Roma Britnell defended some of the bill’s provisions.

“Some of these amendments provide good solutions, such as giving authorized auditors more opportunities to investigate different situations to prevent weed infestations, animal infectious diseases or other biosafety issues,” Britnell said at the time.

The bill is still pending in the Legislative Council of Victoria’s bicameral parliament.

Stormy statements about the European initiative

Some Facebook users shared a publication with a similar statement, but included a photo of Australian Prime Minister Scott Morrison, adding that “the European Commission has received an application to register a new EU citizens’ initiative to end the slaughter of animals.” The source of this information is the far-right Catholic-national daily “Nasz Dziennik”.

Some social media users were not happy with the initiative. “This is another elite plan,” we read in one of the comments. “There was a plague, there will be war, there will be famine and then death. The Four Horsemen of the Apocalypse are not conspiracy theories but facts, like it or not, the end is nigh” – wrote another user.

Such an initiative does exist, but is not an idea of ​​the European Commission.

“End the Slaughter Age” is an “international organization created to end animal breeding, incl. for food purposes, starting with the slaughter of animals. Several campaigns are involved, including the European Citizens’ Initiative (ECI), which has two specific proposals in this direction,” reads the initiative’s website.

Citizens’ initiatives are usually used by citizens to propose policy ideas to the European Commission.

On 27 April 2022, the Commission announced that it had decided to “register the new European Citizens’ Initiative”. Organizers have six months to collect at least a million signatures in seven EU member states. If successful, the Commission will have to respond – either accept or reject the request, explaining the reasons for its decision.

Application: Australian law does not prohibit citizens from growing their own food. The law is intended to support the agricultural sector and does not contain such provisions.